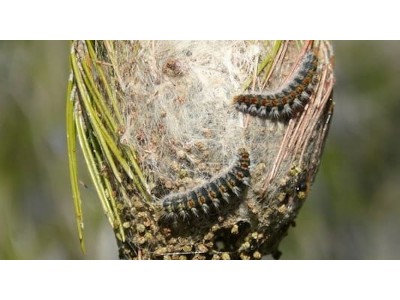 How to eliminate the pine processionary: The 6 best methods

It does not fail.

Spring is approaching and the activity begins at the top of the pines.

The bags, those white cotton-like bags that you can see between the branches, are opened. And out of them, a row of orange caterpillars begin to emerge, in single file and very close together.

And is that this caterpillar is not only a voracious devourer, it can wreak havoc both in the pines and in other plants that it finds once it hits the ground.

In addition, it is also a risk for both animals and people (especially for children).

If this is your case, don't worry. In this post we are going to teach you several of the most used methods to eliminate the pine processionary and prevent it from posing a danger to you and your family (and of course, to your plants).

But first we must understand why it is so dangerous.

Why it is so important to eliminate the pine processionary: possible risks of this caterpillar

Although we only remember it in spring, the processionary spends many months with us, hidden high in the pines.

The moth (which is the adult form of the caterpillar) lays its eggs in late summer. Once they hatch, the larvae begin to feed on the leaves that surround them and form their nests, those characteristic cottony pockets that are so recognizable.

Although on the outside they do not seem like it, inside each of these bags can contain tens or hundreds of larvae.

Then, between February and March (when temperatures rise), the larvae descend in a row to the ground to look for a place to bury themselves, until they emerge towards the end of summer as moths.

And it is on this path to the ground that they are most dangerous.

The problem is not in the larvae themselves, but in the stinging hairs that cover them, and that can cause:

In addition, while the caterpillars are growing they are very voracious insects.

A colony of processionaries can devour all the leaves of a pine (at which time they will move to others) and end up killing the host tree.

That is why it is highly recommended to eliminate them. And if we do it before they hit the ground, the better.

The ideal time to eliminate the processionary is not, as many think, spring, but autumn.

When the eggs have just hatched and pockets are forming, the caterpillars have not yet developed their stinging hairs. And that makes the process of removing them much safer.

Even so, several to see methods to combat them and end them at different times of the year.

A technique that we have already told you about in a previous post.

Endotherapy is a phytosanitary treatment with which an insecticide is inserted into the trunk of the pine.

The insecticide does not harm the tree, but it infiltrates its sap and reaches the leaves. When the caterpillars start to eat them, they die.

This treatment is carried out in autumn, when the eggs have just hatched. That is why it is one of the most effective and safest methods to eliminate the processionary.

In this case it is a question of using a bacterium, Bacillus thuringiensis, as a “natural insecticide”.

This bacterium is administered in the form of powders that are applied on the affected plants. By eating the leaves, the caterpillars also eat the bacteria.

As with endotherapy, this method does not carry any risk for the plant or for animals or people.

3. Manual removal of the nests

If we have not been able to finish the processionary with some of the previous methods, another possibility if the nests are at an easy-to-reach height is to takedown them directly.

But be careful, because this carries a risk.

If you do it between winter and spring, the larvae will have fully developed and will be covered by their stinging hairs.

In this case, you should use long gloves and all necessary protection to prevent the hairs from rubbing your arms.

In addition, once the nest is off the hook you must burn them immediately in a suitable container. This will not only kill the larvae, but also the stinging hairs that could otherwise end up floating through the air.

To eliminate the nests, it is best to do it in the central hours of the day, when the larvae are inactive.

A trick that also works to prevent hives is to wet the bags before cutting them.

This is a similar practice to the previous one, but with less risk.

The idea is to open the pockets to expose the tracks to the outside. If you do it during the winter, when night temperatures are still low, the cold outside will kill the larvae.

Of course, remember to break them near night, or else the larvae will have time to remake the bag.

A method that is as simple as it is effective (although it can be expensive depending on the case).

It consists of putting a plastic barrier around the foot of the pine where the processionaries have been installed.

When they descend from the tree, the caterpillars are unable to overcome this barrier and end up dying.

This is feasible if you have a garden with one or two pines that have been affected by the processionary, but if you have a large plot and a large plague, it will be difficult to put it into practice.

This method works more in the long term than in the short term.

The traps contain synthetic pheromones similar to those released by female caterpillars. When approaching her, the males are caught in the traps.

In this way we only kill a part of the plague, but we break the reproduction cycle (at the end of the following summer there will be no male moths that mate with the females).

It can be useful as a complement to other methods on the list.

7. Other home methods to eliminate the processionary

Finally we include some home methods that some people use to eliminate these pests.

They are as follows:

Regarding these methods, our advice is clear: avoid them at all costs.

To begin with, you are not sure that they are really effective. Not only that, but in the worst case, you could even end up damaging your plants (also, remember that handling nests carelessly is dangerous).

If you need to get rid of a plague of processionaries, our recommendation is that you opt for one of the methods on the list and, if you can, that you go to a professional to avoid risks.

You already know how you can get rid of the processionary

As you have seen, the bad reputation of the processionary caterpillar is more than justified.

In addition to being harmful to plants, it can also be dangerous to us and our family (animals included).

Hence our recommendation is that, if you suffer from this plague, eliminate it as soon as possible.

In Viveros González we know this well, and that is why one of the jobs that most request us between autumn (during the endotherapy season) and spring is precisely that we take care of eliminating these nests.

If you also need help, you can contact us and explain your case.

We'll take care of getting rid of the processionary.